Kalimba has been around for a couple of decades, but it is still not as popular as some instruments. There is a chance that you are not even aware of the existence of this incredible African instrument.

But how does a kalimba work? What made this instrument so popular? Here, I will go through the history of the thumb piano, as well as things that might be interesting for both beginners and experienced players across the globe.

In Africa, each of the cultural groups used to have their own name for what we know now as mbira. This instrument is based on traditional lamellophones, and it’s one of the most advanced examples you can find. There are over one hundred different lamellophones in Africa, and each of them has its own tuning.

What you might not know is that mbira dates to over three thousand years ago. The first instrument was made of wood, and it was often bamboo. The second type made of metal appeared nearly 1,300 years ago.

What is interesting is that it seems that mbira appeared in two places in Africa independently. Furthermore, the main idea behind mbira was to act as a portable xylophone.

There have been so many interpretations and versions of this, so-called, thumb piano, and Portuguese explorers encountered one in 1570. It is worth mentioning that this instrument had metal tines, which means that it was already popular across the continent.

Mbira became rather popular among the Shona of Zimbabwe, and the word mbira comes from their language. But Shona wasn’t the only indigenous group that loved this instrument, and variations of mbira appeared all across Africa.

But it wasn’t until a couple of centuries later that the world got introduced to this incredible instrument. Even though some museums had ancient mbiras in their repertoire, the interest in it never seemed to catch on in the rest of the world. However, it all changed in the 19th century thanks to Hugh Tracey.

The Birth Of Kalimba And Hugh Tracey

Hugh Tracey was born in 1903, and he was an ethnomusicologist from England. His passion was music from Central and Southern Africa, and he shared it with his wife. Over the years, they made over thirty-five thousand recordings of folk music in Africa. But one of his most praised achievements was the introduction of mbira to the rest of the world.

Over the years, Tracey encountered many versions of mbira, and he documented them as well as all the tunings he found across the continent. In 1954, he founded the International Library of African Music with a goal of archiving all the recordings he and his wife made during their stay in Africa.

Furthermore, he founded AMI (which is short for African Musical Instruments) and started making his own version of mbira. He named his instrument kalimba.

Now, the main difference between kalimba and mbira is that kalimba offers a single set of keys, while mbira has double. Moreover, he eliminated buzzing that mbira is famous for, and tuned the instrument based on the Western music theory. Today, most kalimbas you’ll find will be in the key of C major, and they will follow an alternating left-right pattern.

How Does A Kalimba Work

The basic idea behind kalimba is simple. Each kalimba has a single set of tines. These tines are usually made of metal, and by plucking one with your finger, it will vibrate and create sound.

Now, the kalimba can be tuned in any way you see fit, but as I mentioned the majority is in the key of C major. While it is possible to find kalimbas tuned to other keys, like G or anything else, the most common type is C.

In these kalimbas, the root note will be the largest tine, and it will be the lowest possible tone you can play. Naturally, the longer the tine is, the lower is the note it produces. Other tines each next tine is shorter, and they alternate left to right from the root note.

This means that the next one is D, which is on the first one on the left, and the first one on the right of the root is E, and so on. The kalimba offers only notes from a single scale, and you will get C, D, E, F, G, A, B, C. Usually, a thumb piano has seventeen keys, and if this is the case, the scale will repeat over and over again.

When it comes to the plate or board, some kalimbas have a resonating box which can increase the volume and make the sound coming out of it a bit fuller.

Of course, there are models that don’t have a resonator, and they have a single wooden (plastic or anything else) board to which the tines are attached. Some models also have a pickup that allows the user to plug it into an amp or a speaker.

How Kalimba Is Made

Based on the model, the difficulty of making this instrument can vary. The simplest form of the thumb piano is easy to make, and you can even do it yourself if you have the necessary equipment. There are several things that are important for making this instrument, and among the ones that should be considered are materials.

These apply for both the wood or board and for tines. Today, most companies that make kalimbas use mahogany, sandalwood, rosewood, maple, walnut, spruce, bamboo, koa, and others.

When it comes to tines, the earliest mbiras had wooden tines, but today, almost every kalimba has metal keys. The material is most commonly some type of steel, and the one you’ll find often is carbon steel, stainless or spring steel.

Spring steel is a great choice since the durability of the material is exceptional and it works in the elastic part of deformation. What you are looking for when choosing the material for tines is that the metal is durable, and it won’t bend when you start playing.

Now, if you want to make kalimba without a resonating box, you will need to find a wooden board to which you will attach the tines.

On the other hand, a thumb piano with a resonator is a bit more complex, but it is still something you can achieve by yourself with appropriate tools. You can check these videos to see the process of making the instrument, and the results can be rather impressive. 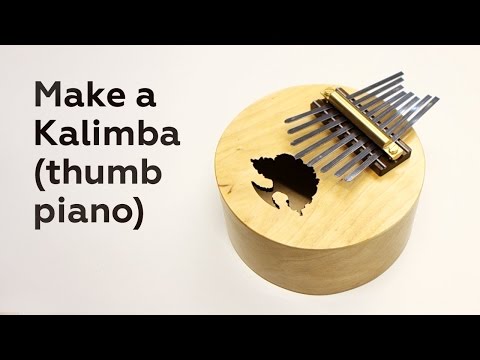 What Sound Does A Kalimba Make

Ancient mbiras were recognizable for the buzzing sound they made. Shona believed that this unique buzz is able to attract ancient spirits, and they used this instrument to communicate with them. Mbira had quite an important role in some rituals, like funerals, for example, where the musician would play the favorite song of the deceased person.

Kalimba, on the other hand, doesn’t buzz when you play it. Moreover, the musicians are not fond of buzzing and they will find a way to eliminate it even if it appears. The sound that comes out of the kalimba is metallic, and it can be quite meditating and relaxing.

There is something special about the way it sounds, and it seems obvious why many decided to get their hands on the thumb piano.

Naturally, not every kalimba will sound the same, and there are so many factors that can have an impact on the sound that you will hear. Firstly, the materials used are probably the most important aspect of the kalimba.

Type of wood, density, presence of resonator, and so on, can all have an impact on the sound that comes out of the instrument. Needless to say, the metal plays an important role, and each type will create a different color of the note.

Players can also use holes if their kalimba has any to implement additional playing techniques like vibrato and ones similar to a wah pedal.

Finally, the tuning can also impact the mood of the song, and there are over a thousand different tunings for mbira. Similarly to its ancestor, kalimba can be tuned in any key and you can even experiment with different modes.

Kalimba has been around for a while, at least in some form. The instrument we know today is actually a westernized version of an ancient African instrument called mbira. A first mbira appeared over three thousand years ago in Africa, and over time it became popular across the continent.

During the mid-nineteenth century, Hugh Tracey created his own version of mbira that he named kalimba. Today, there are so many different types and styles of this instrument, and there is no doubt that you will find the one that’s perfect for you.

But if you are looking to make one by yourself, you’ll be delighted to know that the process is not as complex as you might imagine. With proper tools, you will be able to create a kalimba that is beautiful and perfect for you and your playstyle.